My last epistle, if I remember right, was written while I was a guest at someone else’s board. The following day I returned tour people only to find that they were due for trenches again the next day. So one night’s rest was all that I got – a good night none the less in a real bed with real sheets – all very comfortable. H.Q. were in about the best chateau that we have ever struck – a large mansion, well built, comfortably furnished, and everything in the best of taste. Deer roamed about the park, a glorious place with lawns and meadows and gorgeous trees of every conceivable shape, size and nature. There was also a fruit garden. The rain has spoilt the strawberries but not the currants or raspberries. The last two were almost a record crop and simply dropping off the bushes for want of picking. The owners who are still in residence were quite glad that we should take what we wanted; as a rule they made large quantities of jam, but this year the scarcity of sugar makes it impossible. A large cherry tree provided us with some of the sweetest cherries I have ever eaten and another day or two would have given us bushels of splendid red gooseberries. But it was all too good to last – I knew it would be; we never stay long in these glorious places. Not that my present billet is anything whereat to grouse; I am particularly comfortable. A small cottage with a rather wild garden provides Hacking, Bonnassieux and myself with a lodging. Earlier in the war it was used by a French M.O. who built himself a lean-to log hut at the back to use as an operating room. This hut is now my office-bedroom and is as good as anything I have had in the “trench” area. Yesterday was a very busy day. Part of the line we are now in is new to us, and I spent the morning wandering round all sorts of curious places getting rather wet at times but by degrees learning my way about. Lunch of course was cold by the time I got back, it almost always is, but that is only a trifle. In the afternoon after finishing the reports I had to be off again to try and find a way of getting from A. to B. without going through C., when C. is a village which once in a blue moon the Bosch sees fit to shell. We discovered a way in the end which I hope will satisfy the General but it took a lot of finding. While this was going on the band gave its first performance of Bric a Brac which of course I consequently missed. I hear that it went very well but will reserve judgement until the lucky day when I form part of the audience. After dinner I was out again – this time watching the pyrotechnic display with which the Bosch so very often gladdens our eyes. He is a master in the use of all manner of coloured lights, and really does devise some wonderful shows. For instance when he gets really panicky and sees clouds of smoke or gas rolling towards him, he sends up a beautiful golden rocket, breaking into six or seven other rockets each giving out showers of first rate golden rain. I wanted to clap when I first saw it, but remembered just in time that I was standing quite alone on a most desolate road, with an odd bullet now and then whining miserably overhead. The weather has improved of late and yesterday was warm and very pleasant. Today too is by no means bad thought it looks as if we might have a shower or two. It is now time that I went out to do some work so will close. 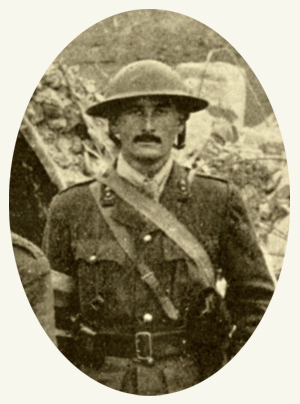 From 26 February 1915 to 26 November 1918, Captain J.D. Hills of the Leicestershire Regiment sent frequent letters home to his family.

We publish the letters 100 years to the day after they were written.

They give a unique insight in to how an individual coped with four years of war on the Western Front.